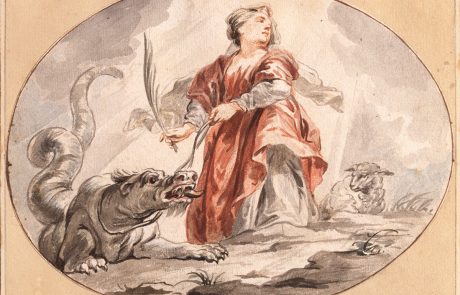 Margaret was born in Antioch in the 3rd Century CE and was the daughter of a pagan priest named Aedesius. Antioch was a Roman province under the rule of the Roman Emperor Diocletian (r.284-305). Emperor Diocletian mounted some of the fiercest persecutions of the early Church, especially in the East of the Empire. Having embraced Christianity, Margaret consecrated her virginity to God. The Governor of Antioch asked to marry her but when she refused, he had Margaret arrested and she was thrown into a dungeon. According to legend, whilst she was in the dungeon, the devil came and tempted her in the form of a dragon. As she made the sign of the Cross the dragon fled. He then returned and swallowed her whole but she was able to escape alive. When Margaret was led out to be beheaded, she thanked God that the end of her travail had come, and prayed that in memory of her miraculous deliverance out of the womb of the dragon, women in labour who invoked her might find succour through her suffering.